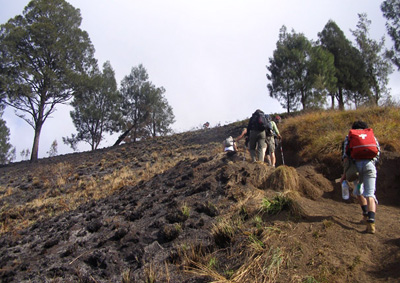 Rinjani Mountain is part of Lombok Island and it has been chosen as one of the best tourist spots in such region aside from the beaches and cultures. When it comes to popularity, the mountain is famous for its trekking route and national park. No wonder, most visitors are those who love nature and those who want to get a new experience. In this case, the most recommended tour package is called Senaru Trail. As the name suggests, this trekking route goes to Senaru Village and it starts from Sembalun Village or vice versa.

The Nuance
The length of Senaru Trail is approximately 34 km, so it is considered tiring for some people. Despite the fact, lots of natural attractions await everyone on the site including scenic views. According to the locals, the trail has a moderate to high difficulty and it functions more than just for hiking, but backpacking and mountain biking as well. Big trees, savannas, mountainous views, and refreshing air become the major features they can find on such route. Not to mention the gates can be seen on both Senaru and Sembalun Village.

Exploring Senaru Trail
In terms of popularity, Senaru Trail is definitely famous. In fact, it is the most used trekking route in Rinjani Mountain. Also, it offers easier and less troublesome landscape to trekkers. That means the trek is suitable for both beginners and experienced hikers. As for the starting point, tourists usually visit Senaru Village to prepare everything. It is located 600 meters above the sea level, so the atmosphere feels so refreshing! What about the ending point? It depends on trekkers’ preference, which is usually either the crater rim or Sembalun Village.

For those who want to head to the crater rim through Senaru Trail, they must spend about 6 hours to get to the site. Usually, trekkers start the activity in the late afternoon but some of them choose early times in order to get to the destination before dark. The first encounter, during trekking, is the rainforest where they can find local animals like black monkeys (lutung). Make sure not to disturb them, though. In order to avoid hassles, it is better to hire a porter beforehand. The price is not that expensive, after all.

Senaru Trail features several posts where tourists can get information and rest for a while before continuing their trekking. Also, it takes patience to pass through everything as this adventure takes some time and stamina. In this case, carrying bottled water and some snacks would be quite helpful especially for first-timers.

How to Get There
For those coming from Mataram City, they can directly head to either Sembalun or Senaru Village. The trip might take about 2-3 hours as the distance is 84 km. For a faster trip, the best route to take should be Raya Mataram – Raya Bayan Street. Also, it is recommended to ride a good vehicle to get to the location.