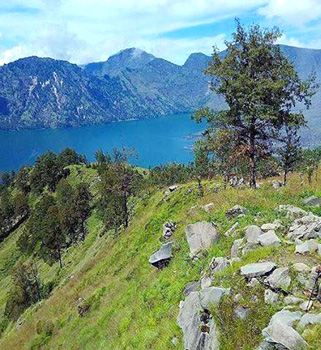 It is a good thing that Rinjani Mountain has an interesting attraction called Ceper Stone. Actually, this site is part of the trekking route for those who are reaching Plawangan Senaru Field. In fact, it takes only an hour to get to this site from that location. Not only it comes to a good place for sightseeing (especially to watch Segara Anak Lake) from a different point of view, but the site is also popular due to its legend. This explains why most tourists would hire a local guide when visiting Ceper Stone as they want to hear the story comfortably while trekking.

The Nuance
Ceper Stone offers several natural beauties to visitors like trees, dry grasses, and hills. The unique part is that the site features various sizes of stones scattered in a different spot. Somehow, these stones make the site unique and it becomes a good location to conduct photography. Not to mention some of the stones have a big size, on which tourists can climb and sit. As for the path, it has moderate difficulty. Have no worries. Even beginners can enjoy trekking here.

Exploring Ceper Stone
Visitors can do several fun activities when visiting Ceper Stone. The most common one is to conduct exploration. That means they simply get around the site and conquer such exciting landscape by walking. One thing, many stones scatter on the ground so trekkers should watch their steps well. What is more? Aside from exploration, sightseeing is also recommended. In this case, make sure to climb the big stones and witness the pristine scenery from there. Once again, do it in a careful manner as the stones can be slippery sometimes.

The next recommended activity is to learn the story related to Ceper Stone. Only the locals and experience tour agents know the story, though. Thus, make sure to come with such service when trekking to the site. The rumor has it. A woman left her son on a stone when she went working. Magically, the stone kept rising over time. The kid called for her mother, but she didn’t respond due to her hectic activity on the farm. The stone kept rising and reached the sky and the kid’s voice could be heard no more.

Even though not all tourists believe in such story, it remains as an interesting folk to the majority of visitors. Recently, Ceper Stone is known for its natural beauty instead of such legend, though. The fact is more photographers often come to the site to capture numerous beautiful objects up there as well.

How to Get There
The good thing is that Ceper Stone is quite accessible either from Senaru or Sembalun. For those who come from Mataram City, though, they need to spend about 3 hours to get to the site. As for the distance, it is 90.4 km. Do not forget to take Raya Mataram – Labuan Lombok Street for a faster trip.