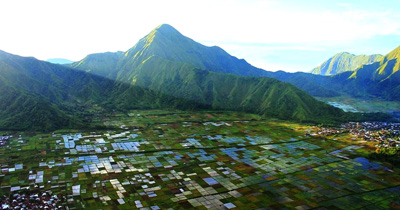 It seems the option of vacation destinations is limitless when it comes to Lombok Island. Many references of beautiful spots are available including mountains, villages, hills, etc. For those who love an adventure, though, visiting Dandaun Hill should be their priority. The site offers stunning scenery and has become a good reference for relaxation and photography. The location is in Sembalun Bumbung Village so it becomes an alternative to Nanggi and Anak Dara Hill. However, it offers more various natural objects than them. What is more?

The Nuance
In terms of beauty, Dandaun Hill offers similar scenery to other hills in Sembalun. What makes it different, though? Aside from displaying the views of the local settlement from above, the hill also shows breathtaking green farms and hundreds of cattle! Not to mention tourists can see lots of trees and local orchids up there. According to the locals, in fact, more than 300 types of wild orchids grow near to the site. They attach to the old trees and look so majestic! No wonder, most tourists come to Dandaun Hill to witness such beauties and take some pictures of them.

Exploring Dandaun Hill
The views of paddy farms become the main attraction on Dandaun Hill. Somehow, they make a perfect background for photography, especially during the nice weather. As an alternative, tourists should take pictures of wild orchids that grow abundantly on nearby trees below the hill. They look beautiful even from afar, in fact. Have no worries. Not many people are seen on the site as Dandaun is not quite popular as compared to other hills especially Nanggi. Instead of getting disappointed, tourists might feel some comfort as they can enjoy such peaceful nuance during trekking and exploration.

The next activity tourists should enjoy in Dandaun Hill is camping. Like other hills in Sembalun, it offers a good spot to build the tent and spend a peaceful night with friends. One thing, make sure not to spoil the environment by littering. That means everyone should take care of the trash after cooking or eating foods. As for the tip, it is better to carry a trash bag to the site and collect the trash later. When going back, do not forget to bring back the bag and throw it to the trash can in a nearby village.

Another recommended activity is to approach the nearby village and visit the farms. Tourists even get the chance to play with cows and take some pictures of them as well. It is a rare opportunity, though. Only those who get the permission from the owner can do such thing. Hopefully, everyone would be lucky during trekking.

How to Get There
The distance between Mataram City and Sembalun Bumbung Village is approximately 82.3 km, so the trip may take about 2-3 hours. As for the best route, it is Raya Mataram – Labuan Lombok. For a faster trip, though, it is recommended to hire a local guide or tour agent. Do not forget to use a good and comfy vehicle, too.