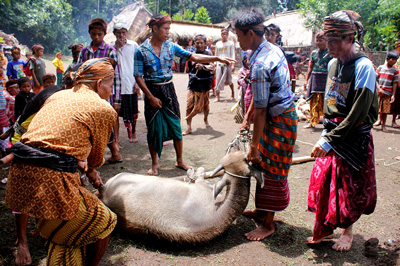 Visiting a beautiful tropical island like Lombok has become everyone’s preference during holidays nowadays. Well, it is the home of many stunning beaches and other natural attractions. However, that does not mean tourists can only enjoy natural tourism because many unique traditions are available for them to enjoy there as well. Here is an example. It is called the local Maulid Ceremony, done in Bayan Village. The purpose is to commemorate the birth of Mohamed the Prophet as well as to strengthen the bond among villagers. As for tourists, such ceremony becomes a unique attraction during the visit indeed.

The Nuance
During the procession, local people from different villages gather in Bayan Village either to perform the ceremony together or simply watch it. The villages include Sukadana, Karang Bajo, Anyar, Loloan, and Senaru actually. Another important fact is that they belong to the local community. Both women and men are allowed to participate as long as they wear proper attire and follow the procession diligently. Most of these people are Moslems, but that doesn’t mean other people with a different religion are forbidden to join it.

Enjoying the Maulid Ceremony
As mentioned earlier, the ceremony is held to commemorate the birth of Mohamed the Prophet. The procession consists of several parts. In the first day, the locals collect foods and other requirements especially “Kayu Aiq”. In the next day, they perform a community prayer and eat together at Bayan Mosque. Aside from the villagers, tourists are allowed to join it as long as they have gained permission from the leaders. Otherwise, they can only witness the procession from afar.

One of the processions is called “Menyembeq”. It is the time when the leaders give a mark on villagers’ head using a special paste called mamaq. The purpose is to give an identity to the real members of the villages. That means visitors or tourists won’t get this mark, even though they are allowed to join the ceremony. The next procession is to clean some equipment that belongs to the villages including Balen Tempan and Balen Unggun. After cleaning, they perform a ritual called “Taikan Mulud” including praying and meditation.

At night, during the full moon, the leaders start decorating the interior part of Bayan Mosque and later a beautiful performance called “Presean” occurs. Overall, the ceremony is quite interesting and valuable. Moreover, tourists are allowed to participate and get a memorable experience during the event. The fact is that more processions need to be done in order to complete the ceremony. Some of them have been mentioned above, but you need to gather more information from your tour guide later. Enjoy.

How to Get There
The distance between Mataram City and Bayan Village is 81.5 km. That means the trip takes around 2 hours and 30 minutes. It can even be faster if tourists take the best route, which is Raya Mataram – Raya Bayan Street.