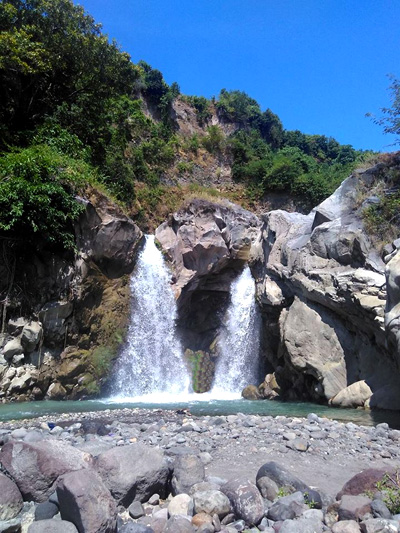 One of the charms of Rinjani Mountain is definitely the group of waterfalls that scatter around it. As for the reference, there is one called Candi Batu and it resides in Sambik Elen Village, Easy Lombok Regency. Despite its unpopularity, more tourists have been aware of it and the locals keep promoting it to more people out there. Not only the waterfall is suitable for photography, it also becomes a good site for playing water. Some people even come to the location in order enjoy its serene nuance and they take advantage of it for relaxation.

The Nuance
Unlike other waterfalls located in Rinjani Mountain, the access to Candi Batu Waterfall is considered easy. Thanks to the signboard installed near to Sambik Elen Village. Everyone is able to get to the site without hassles. However, the route is not quite smooth due to the presence of the muddy and dusty condition. The distance between the village and the waterfall is about 200 meters, so it won’t take long to get there. Even walking feels so fun when heading to the site! Once arriving, they may see a stunning waterfall with the height of about 10 meters. Instead of falling, the water flows looking like a river!

Exploring Candi Batu Waterfall
“Candi” means temple and “Batu” means stone. So, why did the locals name it that way? According to the locals, it is because of the presence of rocks and stones on the site, which is similar to those of the temples. No wonder, many visitors often conduct photography and take some pictures of the stones along with the falls. It doesn’t even require good skills to take great photos as the objects are quite amusing.

The next activity to do in Candi Batu Waterfall is relaxation. The sound of gurgling water and the strong current of the falls is indeed comforting. Somehow, it provides peace to visitors and it is indeed suitable for relaxation. As for a more challenging experience, tourists should try getting in the water and take a bath in it. Be careful, though. The current is strong, so it is a little bit dangerous for tourists. Despite the fact, it doesn’t stop visitors to enjoy its refreshing water.

Another reason to visit Candi Batu Waterfall is to enjoy short trekking. In order to get to the site, tourists must spend several minutes of walking, after all. Have no worries. The landscape is easy, so everyone can enjoy it. Also, it becomes a good training for those who want to go trekking to Rinjani Mountain later.

How to Get There
For those who come from Mataram City, their first destination is Bayan Sub-District. Later, they need to head to Sambik Elen Village by any type of vehicle. Once arriving at the village, the next thing to do is to conduct short trekking to the waterfall from the available parking area. This whole trip takes about 2 hours and 30 minutes as the distance os 89.8 km. As for the route, the best one is Raya Mataram – Raya Bayan Street.