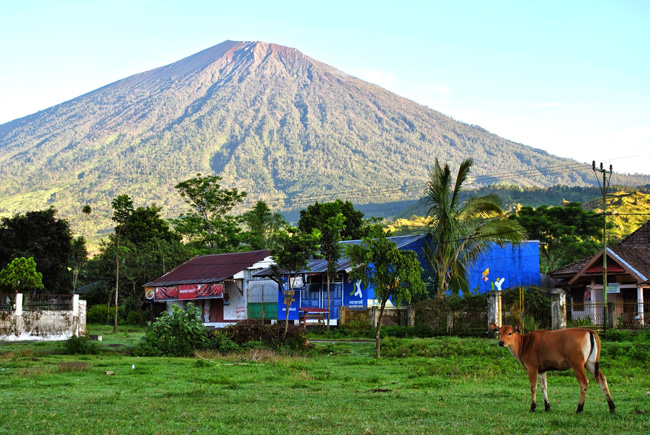 One of the trekking checkpoints in Rinjani Mountain is indeed Sembalun Lawang Village. However, it also owns its charm including the pristine environment and local culture. To be exact, Sembalun Village is part of Sembalun Sub-District and has several siblings including Sajang, Timba Gading, Bilok Petung, and Bumbung Village. All of them belong to the same region, in fact. No wonder, more people want to get a new experience by visiting the village and enjoy some fun activities like photography, exploration, and culture appreciation. So, what is more?

The Nuance
The first fact regarding Sembalun Lawang Village is related to its location, which resides on approximately 1000 meters above the sea level. This explains why the nuance feels cold and refreshing there. In terms of crowd, it is the most crowded as compared to other villages in the same sub-district. When it comes to the landscape, the village features local farms, trees, bushes, and indeed the view of Rinjani Mountain in the back. Even fog often gets to the village and covers the mountain beautifully. Also, the villagers are friendly and some of them can even speak English!

Exploring Sembalun Lawang Village
In terms of size, Sembalun Lawang is considered small. Despite the fact, lots of people come to the site either to prepare before trekking or exploring the village. So, what can tourists enjoy there? The first impression is the formation of farms, arranged beautifully in different levels. Not to mention local farmers are often seen, doing their job on the field. Somehow, they make a perfect background for photography. It is even possible to approach them as long as tourists don’t cause any disturbance to those farmers.

Aside from the farmers, other interesting landscapes can be seen as well including the majestic cliffs that surround the village. According to the locals, such cliffs were formed due to the explosion of Rinjani Mountain in the past hundred years ago. Do not forget to explore the cliffs and take some good pictures of them. In a nutshell, tourists should never forget to carry a camera when visiting Sembalun Lawang Village. As for the foods, they can either carry or buy them on the site. Enjoying local foods is definitely recommended.

When exploring the village, do not forget to visit RIC or the local information center regarding trekking and any facts of Rinjani Mountain. On the site, tourists can find other visitors and make some new friends as well. Not to mention they can share experience regarding trekking or other interesting topics with them. Later, they are allowed to visit Segara Anak Lake and conduct trekking to the peak of the mountain, in fact.

How to Get There
From Mataram City, a trip to Sembalun Lawang Village takes approximately 3 hours and 30 minutes as the distance is 99.1 km. As for the best route, it is Raya Mataram – Labuan Lombok Street. No tour guide is needed as the route is considered easy.