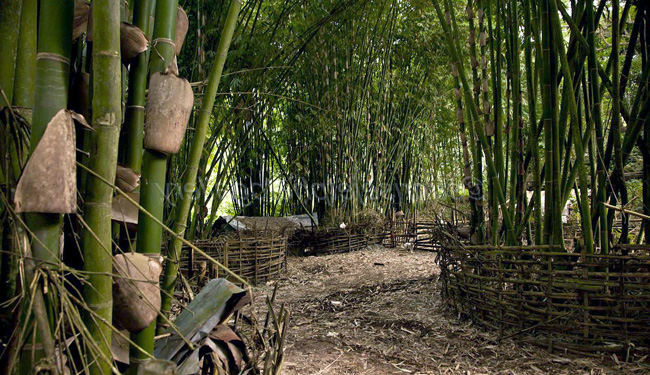 It is safe to say that Rinjani Mountain is a prime vacation destination in Lombok Island. Not only it is suitable for trekking, it features lots of natural attractions for tourists to explore. For instance, there is the famous bamboo park in Sembalun Sub-District. As the name suggests, the site has lots of bamboo trees growing on it! Due to such unique charm, travelers are interested to come to the site and get around the park for both sightseeing and photography. Somehow, it becomes a nice place to spend a vacation with families or friends as well.

The Nuance
In a nutshell, the bamboo park of Sembalun is one of the best references of eco-tourism in Lombok Island. The location is on a highland, so it offers a comfortable and peaceful nuance to visitors. Several traditional houses are seen on the site and the villagers take a good care of the environment as well. There is even already a path, on which tourists can use for exploration. The bamboo trees grow abundantly on the site and they create a shady atmosphere too.

Exploring Bamboo Park
Once tourists get to the location, they can find a lush formation of bamboo trees and some traditional structures located near to those trees. Aside from the main path, which is used to explore the park, tourists may see bridges made of bamboo as well. The locals built and arranged them neatly that the bridges often become a background for photography among visitors. Moreover, the exploration becomes more comfortable due to the presence of shady bamboo trees and breezy wind of the highland.

Overall, this thematic park is suitable for those who want to get away from daily hectic routines and to find peace in a famous village like Sembalun. Not only it is famous among the locals, many people from different regions are also seen in this park. That means the Bamboo Park has a good popularity and it keeps attracting more visitors as the time goes by. Usually, the site becomes crowded in the afternoon as tourists want to enjoy its romantic and serene atmosphere. Even though they come at noon, the weather feels nice due to the shady trees. That means it won’t feel hot at all as long as they walk close to the bamboo trees instead of wandering afar from them.

In fact, some people come to the Bamboo Park in the evening as they want to feel calmer ambiance, accompanied by beautiful stars on the sky. One thing, such quiet nuance sounds creepy to others as the locals believe bamboo trees are the home of apparitions.

How to Get There
The bamboo park belongs to Sembalun Sub-District. From Mataram City, the trip might take about 3 hours as the distance between those locations is 90.4 km. As for the best route to take, they can use Raya Mataram – Labuan Lombok Street. Later, it takes a short trekking in order to get to the park.