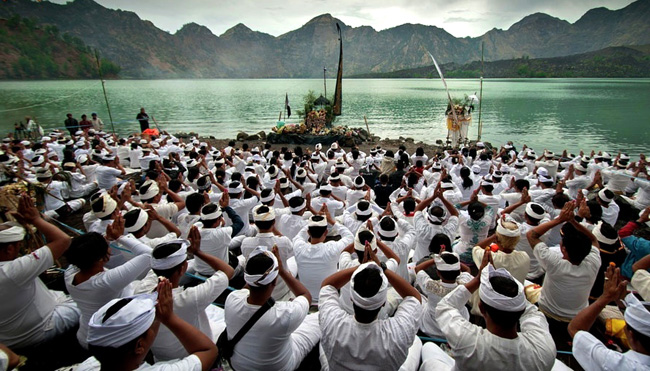 Before deciding to visit Lombok Island, travelers need to know what they are going to do there. As for the reference, they can watch a unique tradition of the locals called Mulang Pakelem Ceremony. It belongs to Hindu community, but tourists are allowed to join the event as long as they have acquired the permission beforehand. The ceremony is done regularly during the full month on the fifth month of the year at Segara Anak Lake. Before heading to the lake, the participants gather at Jagadnata Temple to make the preparation.

The Nuance
As mentioned before, the prime location to perform Mulang Pekelem Ceremony is the Segara Lake at Rinjani Mountain. The people may build an altar and place some offerings on it. The nuance is quite peaceful as the main activity is only praying. Later, they may sing Pangruwat Bumi song and perform a holy dance to the God as well. As for the attire, these people wear the traditional white Hindu prayer clothes featuring the white bandana too. Overall, they look so attractive! As for the tourists, they must wear clean and neat clothes as the prime requirement to join the event.

Enjoying Mulang Pakelem Ceremony
Mulang Pakelem Ceremony is a signature event done by Hindu People in Lombok Island. Also, it occurs once every 5 years and is considered a big event for both the locals and tourists. Due to its popularity, lots of people (even those who are not Hindu) come to see and enjoy the procession. Simply put, it is a reflection of Tri Hita Karana and the locals believe it may bring good fortunes to the earth and prevent any natural disasters in the future. The set is in Segara Anak Lake, which is believed as the Sasak Tribe’s spiritual epicenter.

As for tourists, they need to know that Mulang Pakelem Ceremony is a long and tiring ritual. That means it takes much time and energy to either join or witness such event. According to the locals, the ceremony runs for 3 days and it involves lots of people from different villages. What about the history, actually? There was once a kingdom called Karang Asem. It suffered drought and numerous health issues back then. In order to overcome the problems, the king decided to conduct some ritual in Segara Anak Lake. It was quite a magic as those difficulties were gone gradually after it.

Aside from the history, Mulang Pakelem Ceremony is also popular due to its cultural value. Tourists can learn some interesting facts as well as enjoy the procession along with the locals, after all. It is even said the trekking to the lake won’t be tiring at all due to the bless of the God.

How to Get There
Tourists can either go directly to Segara Anak Lake or visit Jagadnata Temple first. One thing, they must come at the right time when the ceremony is being held. Otherwise, they may miss the opportunity to witness it. Make sure to come with a group, as the trip to the lake costs much stamina and time.